We had some great New Palestine fan/parent support at Twin Lakes High School.  Thank you to all who attended.  It always helps to have friendly faces to see when we are not performing at NPHS.  For those who were unable to stay for the "Night Show", here were the final results:

Both choirs did a fantastic job with their shows.  There were no major issues with either show and we kept within our allotted 25 minutes for the performance and equipment loading/unloading.  Earning a chance to perform again in the night show is a great opportunity for both groups.  They received additional ISSMA judging feedback and both groups improved their scores in the night show.  While both groups finished in the last spot in the Night Show, keep in mind that their scores were very good and both groups easily could have been 1-2 slots higher with just a few points difference.  This shows the incredible effort of both show choirs and the hard work they have put in over the past month.  Diamond Sensations willing "Best Choreography" was a great feat.  For those who are new to Show Choir, it's extremely unusual for the "Best Choreography" or "Best Vocals" award to be issued outside of the top two finishers for the day (note the Mixed Choir results).  This award is a way for the judges to let us know that, even though we didn't win the competition, our choregraphy was considered "The Best of the Day" for the Women's Division.  Congratulations to Diamond Sensations for executing a great show and Thank You to our Diamond Sensations choreographer, Jared Yoder, for the time and effort you have put into designing a fantastic show that we saw and the judges recognized.  ​Our "crew" has won the "Best Crew" award only one other time in history, at any competition, and that was 4 years ago at Twin Lakes.  This was a nice reward for the hard working crew who's handling equipment, costumes, and instruments, when assuring we get our choirs on and off the stage within the 25 minute time-limit.  We came away from Monticello with some great trophy hardware and started the season off on a very positive note.  We were all very proud of both choirs (all of our students) and their accomplishments this weekend - a very long day but a great way to start the season.  Of course, all of the above accolades wouldn't be possible without the time, patience, hard work and dedication of our Choral Director, Steve Beebe.
The full schedule for the day is available for below as a PDF attachment for you to reference.  New Palestine Choir performance times have been highlighted, for your reference.  If you plan to attend and you did not read the information under the "attending a competition" section and "a typical competition day" (or attend the January 10, 2017 parent meeting), you are strongly encouraged to read that information to make sure we are all on the same page.  Here are a few additional points for your information:
Competition History and Notes:
Facebook Announcement posted on Wednesday, January 18, 2017: 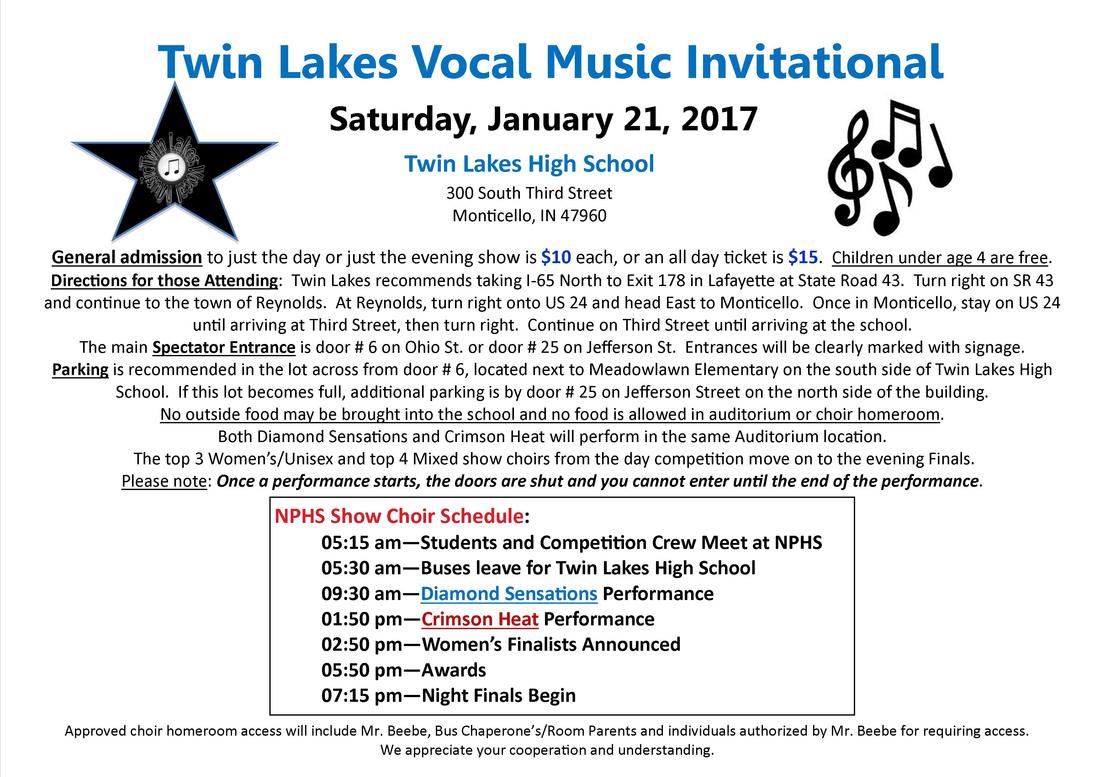