Thank you to everyone who made the trip to Plainfield High School to support Diamond Sensations this past weekend.  Not only did we have some great parent/family support, but we also had a lot of past Diamond Sensations alumni on-had to cheer on our ladies.  While it was what we felt the best possible performance of the season, the 4 judges placed Diamond Sensations in last place for the 2017 State Finals.  The score was actually a tie with 8th Place East Noble Premiere Edition, but a tie-breaker gave East Noble the slight edge over Diamond Sensations.  Recall that ISSMA Competitions score 60% on Vocal Ability and 40% on Choreography.  So, our show can be much more fun to watch and entertaining than another show, but we can lose to the less-appealing show because judges may have observed stronger vocal skills.

The nice thing about State Finals is that ISSMA brings in judges from out of state that haven't judged any of the 9 choirs previously this season and they haven't seen them live.  This usually gives us an advantage in that we are on equal ground for the first time of the season.  At most competitions, Diamond Sensations has to compete against large schools as there are no "Small School Women's Division" competitions we can attend.  The results, when competing against schools 2 and 3 times our size aren't always the best.  Still, we had hoped for and expected a better result for the end of the season this year as our ladies worked very hard.  In spite of the results of the final competition of the year, Diamond Sensations had the most-successful year ever, winning Grand Champion at the last two competitions before State Finals.  We are proud of all that they have accomplished in the 2017 Competition Season.

For those who may be curious, here is how the Mixed Finals ended for 2017:

During the course of a normal season, we typically see Plainfield High School and Northridge High School at least once or twice, but this year we never saw their shows.  We saw Huntington North's fabulous show at Lawrence Central and if they received a 4th place finish in State, we can't image how great the top three must have been.

While this officially ends the 2017 competition season, planning and work for the 2018 competition season begins this summer and will continue through the fall of 2017.  Thank you to everyone who helped during this past season - with costumes, chaperones, equipment transportation and fan support.  While it's the students who do the performing, it takes all of us to make everything function smoothly.
Please note,  Any student who is not remaining at Plainfield High School for the duration of the Women's Small School Show Choir Finals and returning on the bus, must have a Email sent to Mr. Beebe no later than end of day, Thursday, March 16, 2017.  We cannot accept "same day" requests at ISSMA State Finals for you to take your student home versus them riding the bus back to New Palestine High School.  The only exceptions would be a family or medical emergency.  If you are planning on taking your student from Plainfield yourself, don't delay and please send an Email immediately to sbeebe@newpal.k12.in.us.  Also, no student is allowed to leave with another student.  They must leave Plainfield High School with a parent or guardian.  Thank you for your cooperation.
The full schedule for the entire day at Plainfield High School is available above as a PDF attachment.  Here are a few additional points for your information: 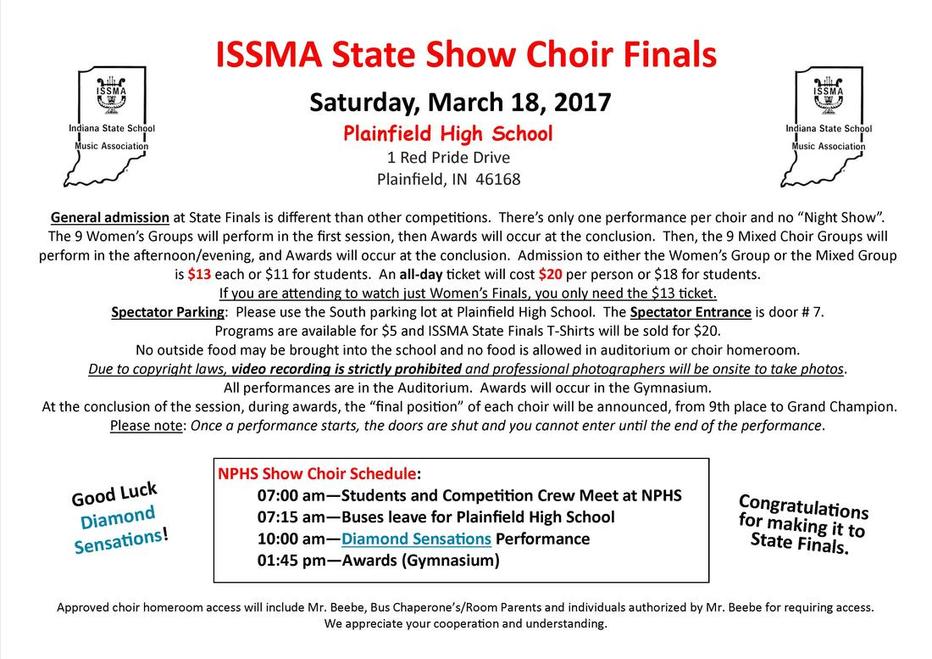