DeKalb was the furthest trip we had planned in the 2016 Competition Season.  We had never visited this competition before and didn't know what to expect.  It turned out to be a great day, especially for Diamond Sensations.  As always, thank you for the great on-site fan support.  It you were able to make the trip, thank you so much for coming and cheering on both of our groups.  For those who were not able to stay for Final Awards, here are the results, as well as the results from the Night Show in both the Varsity and Championship Divisions:

There were no additional awards for the day (DeKalb didn't award a "Best Performer" for each choir).

Both choirs did a fantastic job with their shows.  The Grand Champion finish for Diamond Sensations was significant for a couple of reasons.  First, Diamond Sensations has never been awarded Grand Champion in the past.  Secondly, they finished at the top in a division that contained 11 total choirs, meaning, they outscored 10 other schools, including very large schools (twice the student enrollment of New Palestine) like Avon, Northrop and a school from out of state - Twinsburg (Ohio).  Diamond Sensations also finished ahead of several small schools that tend to go to ISSMA State Finals, such as Northridge, East Noble, Columbia City and Bishop Dwenger.   It was so fantastic to hear their name announced at the top of the list and all members of the choir were awarded medals as well as a good sized trophy.

While Crimson Heat did not qualify for the Night School in the Varsity (Small Mixed) Division, they did finish in 7th place and one position outside of the Evening Finals.  Also, the schools in 5th, 6th and 7th (Crimson) were separated by only a few points, so they were definitely "in the hunt" and easily could have finished 5th or 6th.  Crimson Heat also finished ahead of other small schools that sometimes qualify for ISSMA State Finals, like Twin Lakes and Garrett.

We were proud of the efforts of both groups and all of our students involved in the day.  There were no major issues with either show and it was a successful day all-around.  It was a long trip but a memorable one for several reasons. 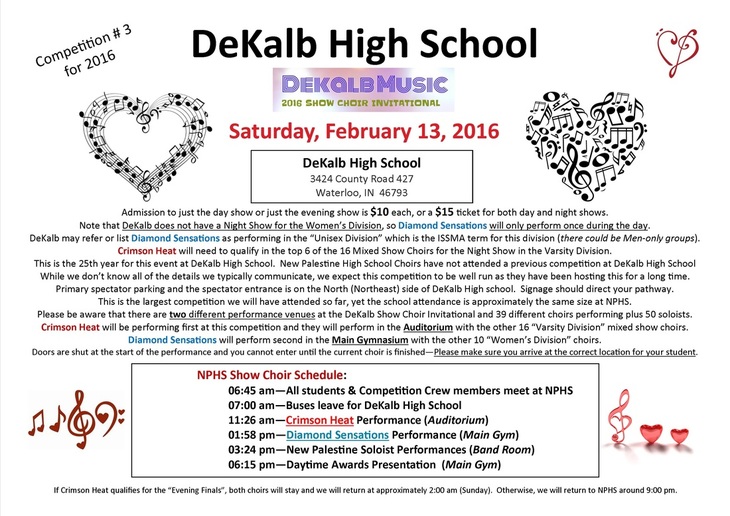 If you are planning to attend this competition, here are a few additional points for your awareness:
Competition History and Notes:
Powered by