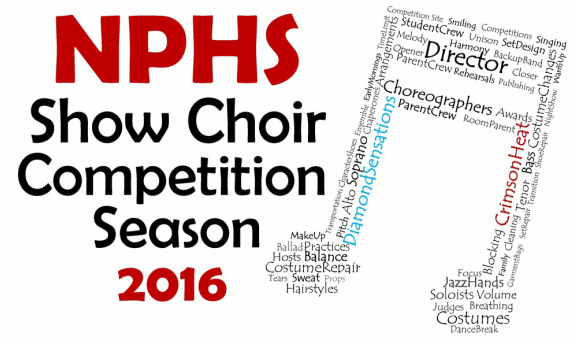 An "All Choir Parent" meeting is planned for Monday, January 11, 2016 at 7:00 pm in the NPHS Auditorium to review the 2016 Competition Season and to address any questions.  If you would like to attend a competition or if you would like to be considered for a chaperone for either Crimson Heat or Diamond Sensations, please be sure to review the information below.
The links at the bottom of this page may help explain further regarding details about Chaperone responsibilities, as well as an example of what your students will experience on a typical competition day and also what you can expect when attending a Show Choir competition.

*  All events listed above are 2016 ISSMA Qualifying competition sites.

Why Are We Going to These Locations Above?  For those who were show choir parents in 2014, you are aware that we traveled some long distances in Indiana to many of the competitions we attended.  In 2015 we followed a more traditional schedule with most competitions within 45 minutes of New Palestine High School.  In 2016, we will have a hybrid schedule with 2 trips that are 2-2.5 hours away and 3-4 that are within 45 minutes of New Palestine High School.  We will be facing some very large schools at some of these competitions, such as Noblesville, Franklin Central, North Central, Pike, etc.  We will also face some very small school choirs (smaller than New Palestine High School) that have show choir programs that can beat some of these large schools and finish in the top 3.  The objective of show choir competition season is for both choirs to receive the highest possible score from the judges and not solely to finish at the top.  Meaning, we can leave a competition, not qualify for evening finals but still come away with a good score for ISSMA State Finals.  The locations chosen for this year are intended to give both Show Choirs the best opportunity for a good score and also a possible good finishing spot at some events.

What is an ISSMA Qualifying Site?  The primary goal of New Palestine High School Show Choirs is to qualify for inclusion in the top 9 small school show choirs in the state of Indiana.  The Indiana State School Music Association (ISSMA) has specific criteria used to judge choirs and they sponsor certain competitions to ensure that ISSMA rules are followed by all choirs and judges at all sponsored events.  At this time, all confirmed competition sites we plan to attend in 2016 are ISSMA qualifying competitions.  The top scores for Diamond Sensations and Crimson Heat will be submitted to ISSMA for inclusion in State Finals selection.  If the scores for either choir are within the top 9 submitted overall in the state of Indiana, then they will be invited to the State Finals on March 19, 2016 at Plainfield High School.  While we want the choirs to do well and finish as high as possible at each competition, the true measure will be the overall score at the conclusion of each event.  Like a cross-country or marathon runner, each choir will be chasing their own scores to try and improve each week and shouldn't be concerned about where they place at each competition.
Chaperone Information
Example of a Competition Day
Attending a Competition
Powered by